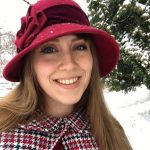 In “Ode to Grecian Urn,” Keats says, “beauty is truth–truth beauty.” Holly first read those words in high school literature. She never fully understood them, however, until she was sitting in a lecture on symbolic logic, and realized that no work of art she had ever seen could compete with the loveliness of a truth table (maybe not precisely what Keats meant). Having studied illustration for two years at the time, she then abandoned her paint brushes and canvases with a drama only an undergraduate could muster and committed herself exclusively to philosophy, determined never to look back.

Eight years have passed since that lecture, and while her devotion to philosophy has not waned and she is now pursuing her master’s degree, the vow made as an excitable undergraduate never to turn back to the world of art has been broken many times over as, in addition to ethics and identity, aesthetics makes for her main area of philosophical interest. Particular topics in philosophy that have sustained her attention of late have included things such as the importance of narrative identity in an account of substantial hope, and the ontology of drag, her work on the latter being published in RuPaul’s Drag Race and Philosophy (she never saw herself contributing to a pop philosophy book, but here we are). When she is not doing philosophy (although she would argue that she is always doing philosophy), she may be found baking cookies, illustrating books (unsurprisingly), watching RuPaul’s Drag Race, and making a general spectacle of herself as she “Bunburies” about in vintage and vintage-inspired clothes.