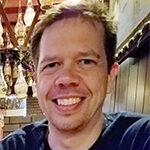 Jason’s research focuses on a novel way of doing philosophy that he refers to as “Internal Perspectivalism.” An Internal Perspectivalist theory about X means that whether X is true about a given physical or biological system turns on what kind of perspective(s) or perspectival capabilities that system has, rather than what kind of perspectives external observers take on it. This approach differs from existing perspectivalist approaches by adopting a particularly thin notion of perspective that does not presuppose cognition, intentions, concepts, representations, or mental or psychological states. Whether or not a system has its own perspective depends on objective facts about its dynamical organization, and specifically on the kind of bifurcations that occur in the system’s dynamics that predispose it to interact with its environment as if its environment were ordered into discrete categories of events, situations, and objects. In his dissertation, Jason used this approach to develop accounts of the nature of biological proper function, control, goal-directedness, minimal agency, and human (commitment-based) agency. He has also developed an Internal Perspectivalist approach to understanding free will (in a paper currently under review), and is working on an Internal Perspectivalist account of the minimal necessary conditions for a physical system to have intrinsic normativity.

Currently, Jason is working on Denis Walsh’s Agency in Living Systems project, which explores the role of basic forms of agency in the process of biological evolution.

Learn more about Jason’s work on his personal website.