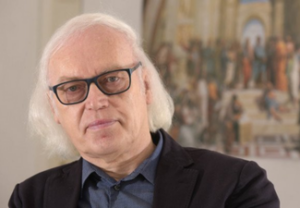 The Kant & Post-Kantian German Philosophy Research Interest Group is pleased to welcome Klaus Vieweg, a professor of Philosophy at the Friedrich Schiller University of Jena, who will give a talk about his recently published biography of Hegel: Hegel: Der Philosoph der Freiheit (the lecture will be in English). Dr. Vieweg’s areas of specialization include German Idealism and the history and theory of skepticism. He is internationally renowned for his research on Hegel’s philosophy as a way of thinking about freedom.

The Foundations of Hegel’s Theory of Free Will

Hegel’s practical philosophy, which he terms the Philosophy of Right, represents a philosophy of free will and action. The Philosophy of Right delineates the architectonic of free will, from the “granite foundations” via the cornerstones and load-bearing walls, up to the roof and the keystones. It sets out the “basic outline” (Grundlinien) of steps in the gradual determination of the idea of freedom and of free will, the building blocks of a philosophical theory of action. In three key chapters of the Philosophy of Right the philosophical theory of free will and action is unfolded in its three stages: a) the personal, b) the moral, and c) the ethical. These present the progressive self-determination of the willing and acting subject, from the person via the moral subject to the ethical subject.

The following reflections refer to and restrict themselves to expounding the core determinations of the concept of free will that precede the actual systematics. It deals primarily with Philosophy of Right §§ 5 – 7. What are developed here are the basic principles of the practical universe, of free will and of action, the core determinations of what, deep down, holds the practical, ethical-cultural world together – freedom. Hegel’s practical philosophy can thus be described as a modern philosophy of freedom.

The fundamental determinateness of the concept of free will can only be made meaningful and clear by reference to Hegel’s innovative logic. The Philosophy of Right rests essentially on the Doctrine of the Concept expounded in the Science of Logic. This categorial instrumentation is an unavoidable condition for any appropriate interpretation of Hegel’s Philosophy of Right. In § 7 of the Philosophy of Right the basic logical pattern (Universality – Particularity – Individuality) which Hegel had already sketched is reiterated and the notion of free will is developed.

The Kant & Post-Kantian German Idealism Group is a a subgroup of the History of Philosophy Research Group, which focuses on European philosophy in Kant and post-Kantian traditions