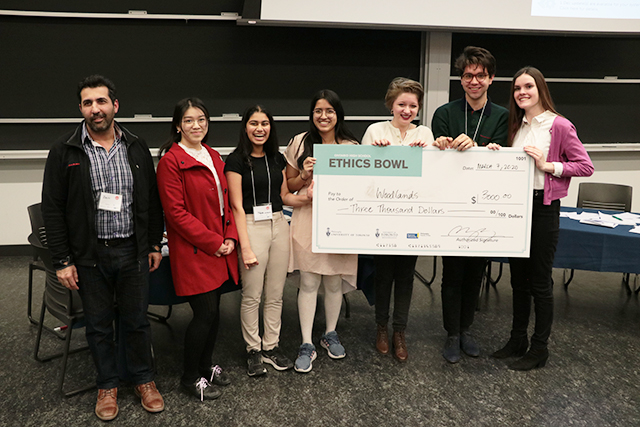 Sunny skies and crisp air graced the Greater Toronto Area on March 7, 2020, but inside the University of Toronto Mississauga’s (UTM) Instructional Building, the heat was on: teams from 11 provincial high schools had come together to compete in the inaugural Ontario High School Ethics Bowl.

Organized with diligence and enthusiasm by Allison Piñeros Glasscock, Juan Piñeros Glasscock, Jeffrey Senese, and Michael Twamley—with the financial assistance of the Departments of Philosophy at Ryerson University and the University of Toronto (UTM and St. George campuses)—the event followed in the footsteps of similar contests in North America, the first one happening on Canadian ground in Winnipeg, Manitoba, in 2014. In Mississauga that Saturday, a diverse crowd of eager high schoolers over the course of a day in three rounds tackled the knotty ethical implications of topics ranging from animal rights to sexting and the concept of generational theft.

The teams deliberated with passion, but also with such grace and generosity of spirit that it left their teachers proud, the judges (philosophy faculty and graduate students) awed, and their fellow contestants full of good cheer. None of the nasty competitiveness sometimes associated with televised debates filled the UTM classrooms that day: participants often opened their arguments with a note of thanks to their opponents, rarely forgot even in the heat of debate to acknowledge points well made by the other team, and unfailingly offered heartfelt congratulations to the victors of a round—even when it meant not advancing oneself.

Martin Pickavé, chair and graduate chair of U of T’s Department of Philosophy, who served as one of the judges that day, considers the event on of his favourite of the year, and Lu-Vada Dunford, a graduate student and also an Ethics Bowl judge, said the quality of debate among the young students left her hopeful for the future: “These young people are truly engaging with each other, thinking on their feet, and showing respect even in disagreement—that is exactly what we need right now.”

Even though her team did not advance to the final rounds, Abbey McDonald, a grade 12 student from Dr. J. M. Denison Secondary School in Newmarket, described the competition as “fun and supportive,” saying that she learned a lot from her fellow debaters, including a sense of team spirit. Johari Hastings, of the all-boys Chaminade College School in North York, agrees and believes that his first-hand experience of the Ontario Ethics Bowl, and preparing for it, might give him a leg up in his future university studies—he aims to go to law school.

For anyone listening as the teams exchanged well-prepared arguments with one another, it might come as a surprise that most students only grouped together—usually selected by their teachers—to practice a few weeks ahead of time. And their approaches to success varied: while some chose designated spokespersons for particular topics that they needed to prepare and share with their teammates, others thrived on the fire generated by ad hoc, though informed, dialogue, relying on individual group members to contribute their expertise in the moment. Importantly, the national Ethics Bowl organization had made the discussion prompts available ahead of time, not only giving students a sense of control over the contest but also quietly emphasizing an important feature of any valuable debate: you should never enter into one unprepared.

Much of the footwork to get the high schools involved came from one of the Ontario event’s organizers, Jeffrey Senese, a philosophy undergraduate student at UTM (who, academically, holds a particular fascination with Immanuel Kant and German Idealism). Having given more than 30 presentations to high school students during the past two years about the enormous professional and personal benefits of studying philosophy, he seemed the perfect person to encourage participation in the first Ontario High School Ethics Bowl. Preparations for the event, he admitted, proved intense, but when asked to describe the experience in one word, he picked rewarding without hesitation. In his view, the fact that philosophy concerns itself primarily not with the content of one’s thoughts, but with the process of arriving at these thoughts, makes it an essential tool in the pursuit of truth. “Young people,” he adds, “already possess the characteristics of great, vociferous philosophers—they are rebellious, provocative, and persistent. For this reason the relationship between young people and philosophy is easy; we just need to structure, facilitate, and most importantly, encourage it!”

In the end, it was the six discussants from the Woodlands Secondary School in Mississauga who took the crown—narrowly beating out their challengers from Heart Lake Secondary in Brampton on the subjects of climate-change refugees and Canada’s responsibilities of international intervention in political crises. The jubilant victors could hardly believe their good fortune: after the announcement they half-bounced through the room, feting as well their cherished teacher and coach, Zain Ghadially, who had kept a close eye on them throughout the day. He had followed their every win with curt congratulations and a reminder to the team to keep looking ahead, to not fall into complacency, and to refine their techniques in the following round. Tough love, but it worked—and even “Mr. G.” couldn’t quite hide his pride when the organizers handed the gold medals to his charges in the final ceremony!

The winners took home $3,000 and were set to travel to Winnipeg to compete in the national High School Ethics Bowl on April 23–24, 2020, now unfortunately cancelled due to novel coronavirus pandemic.

Want to see more of the action? We’re working on a video of the event—check back soon!