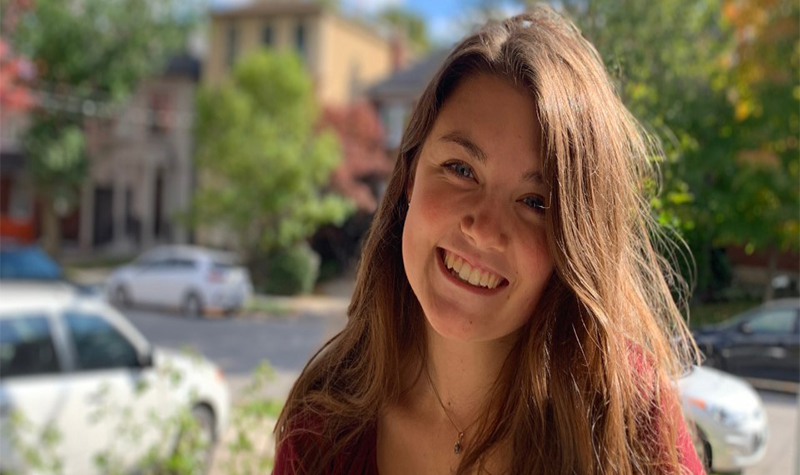 Her graduation—in the summer of 2020—did not look quite as she had imagined: instead of stepping onto the stage in Convocation Hall under the applause of proud family, friends, and peers, Sophia Whicher stood at home, intensely watching a screen for her own name, whose appearance would mark her as a freshly minted University of Toronto graduate. It was a slightly more subdued than hoped-for ending to her undergraduate studies, but life had something else in store to appropriately recognize her academic achievements of the past four years: in November 2020, Whicher received notice that she had won the Brian M. Keenan Prize for her essay titled “Legal Positivism and a Dynamic Picture of the Law.” The paper, resulting from a class Whicher had taken with Professor David Dyzenhaus called The Politics of Legal Space, explores the complex connection between morality and law, particularly in the aftermath of deeply unjust legal systems such as the Nazi Third Reich in Germany between 1933 and 1945 or apartheid South Africa.

Whicher had long been interested in exploring how successor states to immoral political regimes could provide justice to those harmed by the previous legal systems without damaging the credibility of the word of law—and enjoyed basing her philosophy paper on a concrete series of legal cases. Yet she took much more from preparing the essay for the Keenan Prize adjudication committee than just a better understanding of a particular time in history and the philosophical questions surrounding it. “Academically,” she says, wrangling a multitude of sometimes contradictory arguments taught her “that a philosophical debate that appears very black-and-white can in fact be much more complex.” Fitting the many pieces together like a puzzle proved challenging—but also made for a joyous sense of accomplishment “when it all came together and I realized my argument actually made sense!”

Just as important, composing and revising her paper under her professor’s guidance gave her some essential insights into the craft of writing itself. As an admittedly “last-minute person” (Who can relate?!), Whicher needed to adjust her working habits to be able to hand in several drafts to Dyzenhaus before the final deadline. “I learnt that there are a slew of benefits that come with giving ourselves  time to write, get feedback, and then add on and adjust,” Whicher says, emphasizing how much her teacher helped her improve. Winning the prize highlighted the new strategy’s success, motivating her “to begin important tasks earlier” in the future.

More time also leaves room for more conversations about the topic, often with non-experts. Claims Whicher, “My most successful essays have come out of long conversations with my friends and family, many of whom were not studying the topic to begin with but who had new and interesting viewpoints that pushed me to dig deeper into the subject matter.” And varied perspectives—at any stage of the process—are a philosopher’s greatest friend: they keep the mind nimble and arguments open to revision. In short, they foster profound thinking.

What’s next for the young graduate and prize winner? For the moment, Whicher is taking some time to digest all she learned during her undergrad years and think through what she would like to study next. Yet her “unending propensity for asking questions” definitely has a graduate program in philosophy hovering somewhere on the horizon. Of course. This is the person, after all, who made up two words at the age of two: be-why and what-cause. “I haven’t stopped using them since,” the 22-year-old admits with a smile, and we agree that the terms make for handy philosophical concepts.

To the Department of Philosophy’s pride, two other students had their essays short-listed for the Brian M. Keenan Prize, which awards Canadian undergraduate papers on the topics of social and political philosophy, philosophy of history and philosophy of law. C. Kwesi Thomas, another recent graduate and now newly admitted graduate student to the department, as well as Patrick Fraser, who will graduate in the summer of 2021, received special mention from the adjudicating committee for their work. In both cases, the submitted essays originated from a place of discomfort. Thomas found his “A Global Difference Principle: Rawls and Beitz on Global Economic Inequality” “extremely difficult and gruelling to write.” Not happy with the original piece, he spent long hours at Robarts Library delving as deeply as possible “into texts that were not immediately inviting or interesting to me at the time.” Fraser, too, veered from his usual field of interest—philosophy of science—to produce “Philosophical Insight: Falling Whilst Asleep,” originally written for his last credit of coursework in a Philosophy of Literature summer course. “I decided to take that course,” Fraser explains, “because it would allow me to step outside my comfort zone.” The pleasure he derived from the process surprised him, to the point that he recommends this path to all students: “I would encourage all philosophy students to take advantage of such opportunities to develop their own original ideas.” Like Whicher, Thomas and Fraser agree: the philosopher’s place is where their ideas rub up against convention and familiarity.

Congratulations to all of them on their tenacity and success!