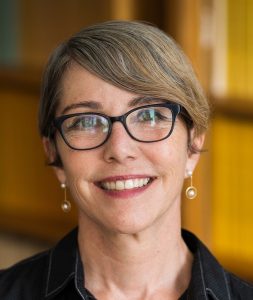 UTSC Professor Jessica Wilson‘s research is primarily in general metaphysics, metaphysics of science and mind,  and epistemology. Get to know her in this brief Q&A!

In a sense I was always interested in philosophy, but it took me quite a while to figure this out.  From early on I was curious about the nature and structure of reality, about how the different sciences are related, about whether the mental is fundamentally different from the physical, and so on.  But it never occurred to me that one should study philosophy in order to explore such questions; I thought that philosophy was primarily the study of historical systems of (largely outdated) ideas.  So as an undergraduate I studied physics and math (getting a degree in the latter); but though I enjoyed both fields of study, these turned out not to treat the questions I was interested in at a sufficient level of generality.

After getting my degree, I worked as a computer programmer for a few years, but my heart wasn’t in it, and eventually I decided to go back to school.  I was living in Boulder, Colorado at the time and I got the catalog for the local branch of the University of Colorado.  I was flipping through the catalog, wondering what I might study—History? English?—when I came upon the Philosophy section. Reading the course descriptions—especially concerning metaphysics and epistemology—I was completely blown away. These courses treated the questions I hoped to explore; this was the field I was hoping for! I took a couple of classes—fortuitously, the philosophy faculty at UC Boulder was (and is) excellent—and my hopes were confirmed.  Here was an area of study treating the big questions—about the fundamental structure of reality, about the relations between the seemingly diverse sciences, about the nature of mind and its relation to body, about when we should take ourselves to be justified in believing something, about what it is to be a good and/or ethical person, and so on—in a rigorous and frequently illuminating fashion.

Since then, I’ve never looked back, first getting my PhD from Cornell University, then working at the University of Michigan Ann Arbor for several years before joining the philosophy faculty here at the University of Toronto Scarborough.  And though I came to philosophy comparatively late, my previous studies have not gone to waste in my work in the branch of philosophy sometimes called “the metaphysics of science”.  Indeed, one of the wonderful things about philosophy is that any and all relevant data—from science, math, psychology, art, literature, politics, and so on—may be brought to the table in the course of investigating a given issue or question.  In this respect the study of philosophy connects up with any number of other disciplines, which is one reason why philosophy is of lifelong interest.  I don’t think I’ve ever met a philosopher who was bored with their work!

What are you working on these days?

I have research interests in both the metaphysics of science and general metaphysics.

My main projects in the metaphysics of science concern how best to characterize intertheoretic relations (e.g., emergence, realization, the determinable-determinate relation) and notions (e.g., the physical) relevant to formulating certain comprehensive metaphysical theses about natural reality. So, for example, in ‘On Characterizing the Physical’ (Philosophical Studies 2009) I argue that the notion of a “physical” entity relevant to formulating physicalism (the thesis that all entities are nothing over and above physical entities) is one according to which the physical entities are those treated (approximately accurately) by current or future physics, with the proviso that the physical entities cannot be themselves fundamentally mental.  I’ve also recently published papers on Newtonian forces, one of which considers and rejects arguments that forces don’t exist, and the other of which explores the relation between component and resultant forces. Most recently I’ve been working on providing a metaphysical account of nonlinear emergence in terms of the scientific notion of a degree of freedom.

My main project in general metaphysics involves assessing Hume’s Dictum, the principle (roughly speaking) that there are no metaphysically necessary connections between distinct entities.  Contemporary philosophers commonly appeal to this dictum in their argumentation, but without much argument; I argue that the Dictum is not directly justified as either analytic or intuitively motivated. My latest project in this vein involves assessing whether the Dictum is indirectly justified, as required by similarity-based accounts of counterfactuals or combinatorial accounts, respectively, of what is possible for natural (broadly scientific) entities.  In other projects in general metaphysics I defend the viability of singularist causation, advance an account of metaphysical modality (possibility and necessity) on which this is a relativized notion, and argue that there may be fundamental determinables.  I recently finished a critical notice of the Chalmers, Manley, and Wasserman anthology, Metametaphysics, entitled ‘Much Ado about ‘Something’’.

I am a big fan of the empiricists David Hume and George Berkeley: both are excellent writers and philosophers, and though I think many of their conclusions—e.g., Hume’s claim that all causation is just a matter of correlation, and Berkeley’s claim that existence depends on (God’s) perception—can be resisted, there is no denying the many attractions of their work, and the world views they attempt to motivate and defend. Among contemporary philosophers, the late great David Lewis is perhaps the philosopher whose work I would bring to a desert island if need be: he wrote on almost every area of philosophy, more often than not leaving a seriously changed dialectical landscape in his wake.

Which teacher had the greatest influence on your philosophical research?

My most philosophically influential teacher has been Sydney Shoemaker, who supervised my dissertation (“Physicalism, Emergentism, and Fundamental Forces”) at Cornell University. My first introduction to Sydney’s work was through his article “Time and Change”—one of the first philosophy articles I read when getting started at UC Boulder.  At the time I was struck by the clarity, creativity, and elegance of his argumentation (for the thesis that there could be time without change). As I soon learned, these features were characteristic of Sydney’s work, which has been very influential in a range of areas including the metaphysics of properties, causation, and modality. My own work intersects all of these areas, and is heavily informed by Sydney’s pathbreaking contributions. More generally, Sydney’s conscientious and fine-grained direction was crucial to my development as a philosopher: we would meet for hours at a time, and he would regularly give me multiple single-spaced comments on my papers. Indeed, a good friend reminds me that when I came to Cornell, I announced that I wanted to be “the next Sydney Shoemaker”. That’s a hard act to follow, but I still can’t think of a better philosopher to emulate.

What do you try to bring to your undergraduate students?

My primary aim is to provide an encouraging and rigorous environment within which students can become familiar with and engage philosophical topics at the level of sophistication appropriate to their interests and needs. Philosophical topics are of great natural interest, yet students often ﬁnd philosophical debates somewhat opaque, and the practice of philosophy somewhat difficult. Hence I aim to give students the information and the dialectical tools they need to render philosophy both comprehensible and doable. So, for example, I familiarize students with both the historical foundations of and contemporary literature on the topics and debates at issue, so that they understand the underlying motivations for a given topic and experience philosophy as a historical and presently thriving work-in-progress. I also run a continuous “meta-lecture” on methodology in class, flagging as we go the philosophical moves and background assumptions at work. Making the methodology explicit greatly demystiﬁes the practice of philosophy, allowing beginning as well as more advanced students to participate in class discussion and write structurally and argumentatively competent papers.

The dialectical and critical thinking skills that the practice of philosophy develops are of obvious value for pretty much any career; and many of our students go on to top law schools and the like. I and other members of the philosophy department also bring to our role as educators at UTSC a serious commitment to assisting those who aim to make a career in philosophy, providing feedback and advice on writing samples, graduate programs, and related issues. UTSC graduates have had considerable success in the last few years along these lines, getting full-scholarship offers for PhD programs at Princeton, Cornell, Rutgers, University of Western Ontario, and the like.

Beyond these broadly instrumental aims, I hope to bring to my students some measure of my own deep enjoyment of the world of philosophy—a pleasure that comes, in part, from knowing that you can stand on your own argumentative two feet.