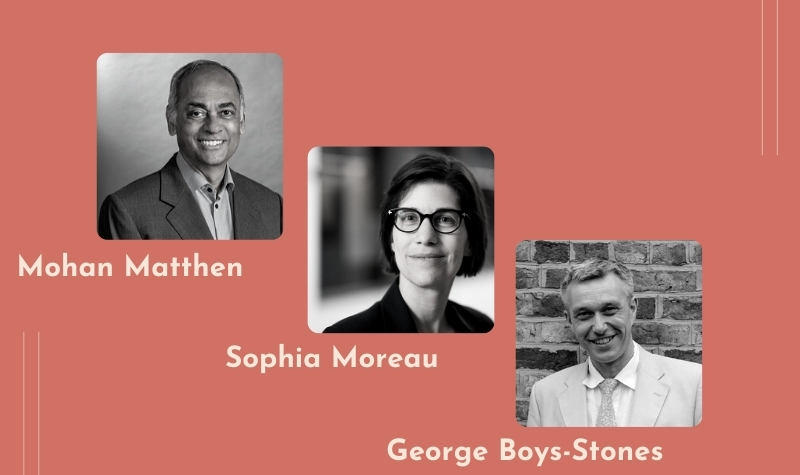 Congratulations to three members of our department for being awarded research fellowships for 2021-2022 by the Jackman Humanities Institute, for work that will fall under the chosen annual theme of “Pleasure.”

Are racial, sexual or gender identities parts of personal identity? Ideally not, according to the prevalent view of Greek and Roman ethical thought. But the prevalent view, I argue, is wrong. This becomes most apparent once we see how badly it handles the evidence we have for discussions of pleasure in relation to personal identity. Foregrounding these discussions raises new questions about ancient ethics – and opens up new possibilities for contemporary and interdisciplinary engagement with the philosophers of antiquity on a wider range of issues concerning embodied experience.

Mohan Matthen was also awarded a 12-month appointment as a Chancellor Jackman Research Fellow in the Humanities. His project is titled “Place, Taste, and the Pleasure of Art”:

How do cultures construct the value of art (including music, visual and performing art, literature, etc.)? In particular, how are we to understand cultural difference? Why are the forms and tropes of one artistic milieu incomprehensible in others? My project makes hedonism the key to answering these questions: every artistic genre seeks to create pleasure in its own distinctive way. Hedonism has largely been discredited in philosophy. Here, I seek to reconstruct its foundations in a way that allows it to be applied to art. I start with a novel and original account of aesthetic pleasure itself, and draw on theoretical resources from philosophy, psychology, and social science to understand cultural construction and the emergence of cultural difference.

Sophia Moreau received a six-month appointment as a Chancellor Jackman Faculty Research Fellow in the Humanities for her project “Interpersonal Obligations and Subordinated Social Groups”:

My project looks at apparently neutral legal rules and moral concepts and explores the ways in which our interpretations of them privilege the needs and perspectives of certain social groups and inadvertently render other social groups (such as women, racial minorities, or people with disabilities) invisible in certain contexts, thereby contributing to their marginalization in our societies.  The project has two sides –a legal side, and a moral side.  The legal side will analyze the impact of legal rules and doctrines on already marginalized social groups, in an attempt to explore the ways in which the law silently and unintentionally exacerbates existing social disadvantages.  The moral side will consider the ways in which philosophers have understood concepts that they treat as basic to our everyday moral reasoning (concepts such as “obligation” and “autonomy”) and will ask whether our interpretations of these concepts inadvertently reflect the experiences and needs of more privileged groups and fail to capture some of the different experiences of subordinated groups.  In addition to critiquing our existing practices in the law and in moral philosophy, I shall explore creative solutions.  Can we redraft certain problematic legal rules and rethink our interpretations of certain basic moral concepts, so that they do not render particular social groups invisible?  What will the new ones look like? And who will we see, for the first time, when we try?