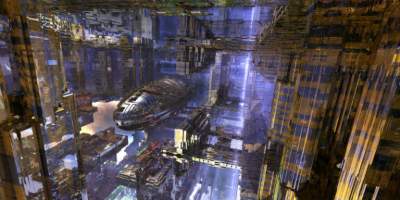 What is the relationship between technology and culture? The sci-fi genre has endlessly grappled with this question.

In particular, Heath’s article focuses on the interplay between culture, technology, institutions, and state systems, and on science fiction as a commentary on liberal societies.

Heath’s essay focuses on Banks’ Consider Phlebas (1987), a novel that depicts a future in which “basic problems of social organization will be given essentially technocratic solutions.” In a tour through political philosophy and the sci-fi universe, Heath comments on the anachronistic qualities of beloved sci-fi works like of Dune and Star Wars, which combine thinly-veiled versions of feudal/imperial societies with advanced technologies (“there are functional relations between technology and social structure, so that you can’t just combine them any old way.”)

“What distinguishes Banks’s work,” writes Heath, “is that he imagines a scenario in which technological development has also driven changes in the social structure.”

In Consider Phlebas, the population has engineered such thorough technological solutions to their obstacles and restrictions that they have a limitless level of freedom. Ending with a meditation on the fact that “the paradox of freedom is that it deprives choice of all meaningfulness,” Heath concludes with the assertion that Banks’ novel is an interesting portrait of a culture whose operations are in effect intended as a solution to its own existential crisis.