This morning, students enrolled in PHL100Y—Introduction to Philosophy (Historical) had a surprise waiting for them: their instructor, Professor Donald Ainslie, a Hume expert and the former principal of University College, showed up to class in a full-length penguin costume. Eliciting giggles and many a cell-phone photograph, Ainslie’s plumed suit also had a more profound outcome: raising awareness, and donations, for the work of UNICEF.

As he had in 2010, when he dressed up as an aid delivery box, Ainslie this year again participated in UNICEF’s Prof-in-a-Prop campaign. Launched in 2008 by the student-led UNICEF on Campus, the Prof-in-a-Prop initiative involves collecting donations from various classes on the University of Toronto’s St. George campus, with the aim of raising awareness about UNICEF’s work on children’s rights, education, and child safety—all while incorporating the fun spirit of Hallowe’en.

It didn’t take much to convince Ainslie of the good deed, and his students likewise responded with enthusiasm to his idea of an imposing philosophizing penguin. Donations, which will go directly to UNICEF Canada in support of its global programs, can be made any time between October 26 and October 31, 2022. Professor Penguin encourages you to help. 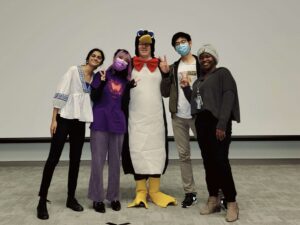 Donald Ainslie with some of his students from PHL100Y