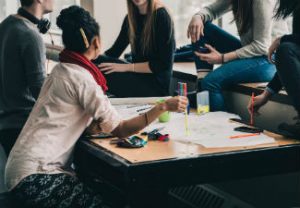 The Department of Philosophy works to ensure that each philosophy student can acquire and hone the skills and resources he or she needs to become a better philosopher, as a reader, as a discussant, and most of all as a writer. In all its activities, the Department encourages its members to be respectful, constructive, and inclusive in philosophical discussion.

Here are some useful resources:

Graduate students have at their disposal the resources of the David Savan Library, located on the department’s premises at the Jackman Humanities Building, 170 St. George Street, 5th floor.  It contains a collection of books and periodicals in philosophy, together with tools for searching philosophy collections.

Graduate students are assigned study carrels in the department which have hook-ups for notebook computers; they also have exclusive use of a room containing printers and computers. Please read the policy on printer use carefully (PDF). Wireless connectivity is available throughout the department and campus.

Philosophy Colloquia are held 3-4 times each year. They features invited speakers from other universities on a wide range of philosophical topics. All members of the faculty and graduate students are expected to attend. A reception in honour of the speaker is held following the lecture.

View all colloquia in our Events listings.

The department hosts several endowed lecture series. The Jerome S. Simon Lectures are a biennial series of colloquia given by a philosopher of international distinction. Recent Simon lecturers have included:

Other endowed lecture series include the Edith Bruce Memorial Lectures, the Roseman Lectures in Practical Ethics, and the University College Priestly Lectures.

Each of the department’s five faculty research interest groups hosts a series of speakers throughout the year:

The Group Talks are open to all interested faculty and students. View all Group Talks in our Event listings.

The 2-day University of Toronto Graduate Philosophy Conference is organized and run each spring by the Graduate Philosophy Students’ Union. Roughly half a dozen papers are selected from submissions by graduate students from around the world, and each is assigned a UT graduate student as commentator. Recent keynote speakers have included Raymond Geuss, Philip Pettit, Timothy Williamson, and Julia Annas.

Our department collaborates on large and diverse research projects with a variety of elite institutions and scholars around the world. Our current collaborative projects include the Consortium for the History and Philosophy of Biology, which comprises five global member institutions, and the Network for Sensory Research, which links five interdisciplinary research centres around the world.

The Centre for Ethics

The Centre for Ethics is an interdisciplinary centre aimed at advancing research and teaching in the field of ethics. The Centre’s program activities and events include public lectures, conferences and workshops, seminars, public issues forums, and community research partnerships.

Minorities and Philosophy (MAP) is an organization within our department (and many other philosophy departments throughout North America) the aims of which are: to encourage minority representation in our field, provide greater opportunities for presenting and discussing philosophy from minority perspectives, and foster discussion of these and other related theoretical and practical issues.

Past MAP events include:

The Graduate Forum meets occasionally during the year. It provides an opportunity for graduate students to present papers in an informal setting. Each Spring, the Chair of the department hosts the annual Book Launch, an event that celebrates the publication of new works by members of the faculty. More than a hundred books have been published by members of the philosophy faculty during the past 10 years.