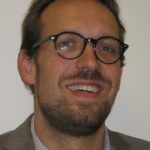 Nick Stang joined the Department in Fall 2014. His primary research interests are metaphysics and its history (mainly in German philosophy). His first book, Kant’s Modal Metaphysics, was published by Oxford University Press in 2016. He is currently working on a book about what Kant’s critique of metaphysics has to do with contemporary analytic metaphysics; its tentative title is How is Metaphysics Possible? A Critique of Analytic Reason.

While most of Stang’s published work has been about Kant, he is increasingly interested in pre-Kantian rationalism (Leibniz, Spinoza) and in post-Kantian figures, especially Hegel and Heidegger. He also works on contemporary metaphysics and aesthetics.

Nick Stang blogs occasionally about aesthetics at Aesthetics for Birds. He can be found on Twitter at @sturmundstang. For more information, please see his personal website.