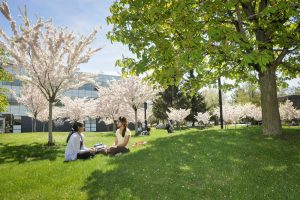 Who are we at UTSC Philosophy?

We are a group of dedicated researchers and teachers. From year to year, our collective publication record is frequently the best and always nearly so among the university’s three philosophy departments.

What do we offer?

Our B-level courses are medium-sized lecture classes covering one of the major areas in philosophy: for example theory of knowledge, ancient philosophy, or political philosophy.

Our specialist program is for the student with a very high level of dedication to philosophy. Specialists take 24 half-courses, which works out in practice to between three and four in a typical semester. The specialist can be confident of acquiring a thorough and deep exposure to a great many areas of philosophy.

Our majors take 14 half-courses, which works out in practice to two or three in a typical semester. This leaves room for a major in a second field. A double-major in philosophy and, for example, physics, English, math, economics, neuroscience, or linguistics can provide synergies that are valuable in many ways: one’s philosophical training enables one to look more deeply at the foundations of one’s other field; one’s training in the other field provides one with valuable data against which to formulate or assess philosophical theories.

Specialists and majors take a high percentage of their courses in smaller, more intimate C- and D-level courses, where papers are marked intensively by professors.

Our specialists and majors have a very high level of esprit de corps, meeting regularly through the Association of Philosophy Students for debates, talks, movie nights, and other social events, and to put on an annual international undergraduate conference.

Our history and reputation

Our department was born on July 1, 2010. Prior to this, our faculty were members of the Department of Humanities; this arrangement had been in place since the founding of UTSC. Our department hosts a mix of veteran members and more recent hires: some of us have been at UTSC since the 1980s or earlier, though most of us moved here after 2002.