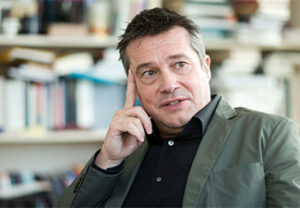 We are pleased to announce Rainer Forst as our esteemed speaker for the 2023 Jerome S. Simon Lectures.

Rainer Forst is a professor of Political Theory and Philosophy and the director of the Research Center Normative Orders at Goethe University Frankfurt. His research focuses on questions of justice, democracy, and toleration, as well as critical theory and practical reason. In 2012 he was awarded the Gottfried Wilhelm Leibniz Prize of the German Research Foundation, the highest award for a German scholar. He is a member of the Berlin-Brandenburg Academy of Sciences and Humanities and a Corresponding Fellow of the British Academy.

He held numerous visiting professorships and fellowships in the United States, for example, at the New School for Social Research, Dartmouth College, Rice University, the University of Michigan and NYU. In 2021, he was a Fellow at the Thomas Mann House in Los Angeles. He is also Visiting Research Professor at the Wissenschaftszentrum Berlin.

His work has received great international attention; for example, in recent years, five collections of critical essays on his work in English (Arthur Ripstein and Melissa Williams among the authors) with replies by him have been published.

In these lectures, I discuss an important distinction concerning the analysis of normative concepts. Some of these are normatively dependent, that is, they require other normative sources in order to gain normative value and substance. Solidarity and trust (but also toleration) are examples. Justice, on the other hand, is normatively independent, as its core concept entails a normative content that guides the possible conceptions of justice, which is not the case with solidarity or trust. Their core concept is of a descriptive nature.

This lecture distinguishes between a general concept and several, context-specific normative conceptions of solidarity. The general concept refers to a particular practical attitude and involves a form of “standing by” others based on a particular normative bond constituted by a common cause or a shared identity. Since solidarity is a normatively dependent concept, the nature of such bonds, causes or identities is not determined by the concept. Furthermore, solidarity itself, without the addition of further normative sources, is not a value; it can serve worthy or unworthy causes. Also, on the general conceptual level, the questions whether solidary acts are of a supererogatory nature or presuppose a particular sort of reciprocity or symmetry are left open. These questions have to be dealt with on the level of particular conceptions of solidarity, of which the article distinguishes four general ones: ethical, legal, political, or moral.

In this lecture, I challenge widespread assumptions in trust research according to which trust and conflict are opposing terms or where trust is generally seen as a value. Rather, I argue that trust, as a normatively dependent concept, is only valuable if properly justified, and I locate such justifications in contexts of social and political conflict. The lecture proposes to define the general concept of a trust relation as a four-place term, and it distinguishes the general concept from various conceptions of trust. With regard to the justification of trust, a distinction between internal and full justification is introduced, and the justification of trust is linked to the relations of justification between trusters and trusted. It is argued that trust in conflict(s) emerges were relations of a certain quality exist among the parties of a conflict, often by way of institutional mediation.

In this lecture, I argue for the normative independence and priority of justice as compared to other values. For a conception of justice must provide higher-order reasons for the kind of, e.g., liberty or equality that it allows members of a normative order to claim and demand of each other. Based on a distinction between two ways of thinking about justice, relational-structural accounts versus outcome- and recipient-oriented approaches (such as luck egalitarianism), a conception of justice as justification is developed and located in the first paradigm. That conception considers the first question of justice to be what power individuals and groups have to co-determine the basic structure of their society. Developing the substantive and procedural aspects of this view requires an account of a basic structure of justification that secures the status of non-dominated legal, political and social equals who ought to be the authorities within that order.

About the Simon Lectures