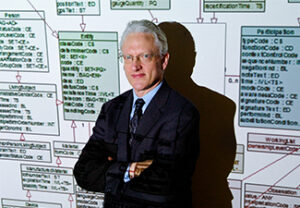 The Department of Philosophy is delighted to welcome as guest speaker Barry Smith, Distinguished Julian Park Professor of Philosophy and professor of Biomedical Informatics, Computer Science and Engineering, and Neurology in the University at Buffalo. Professor Smith contributes to both theoretical and applied research in ontology and also serves as the director of the National Center for Ontological Research. Smith is lead developer of Basic Formal Ontology (BFO), an international standard top-level ontology (ISO/IEC 21838-2) used by more than 350 ontology development groups across the world. He has authored more than 700 publications, with some 40,000 citations and an h-index of 98. His research has been funded by the National Institutes of Health, the U.S., Swiss, and Austrian National Science Foundations, the U.S. Department of Defense, the Humboldt and Volkswagen Foundations, and the European Union.

This guest lecture is part of the course PHL2196F — Seminar in Philosophy of Science: Current Trends in Formal and Applied Ontology, taught by Rasmus Larsen.

AI and the Ontology of Complex Systems

AI has been amazingly successful in areas such as game playing, missile defense, pattern recognition, and, most recently, protein folding prediction. It has been modestly successful in processing linguistic text (illustrated, for example, by Google Translate). But in many other areas the results have been disappointing. After 50 years of attempts to create an intelligent conversation machine, computer answering services such as those offered by banks still perform miserably. In this talk, I shall argue that there are limits to the potential of AI, and show that these limits have to do with the nature of complex systems.