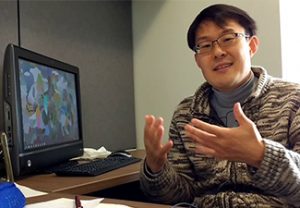 The Logic and Philosophy of Science Group is pleased to welcome guest speaker Chunghyoung Lee, associate professor at Pohang University of Science and Technology (Postech) in the Republic of Korea. Professor Lee has had a lifelong interest in infinity. Infinity gives rise to various problems in the areas of logic, mathematics, metaphysics, religion, physics, and decision theory, and he believes that these problems are variants of similar problems arising in different circumstances and so ask for unified and comprehensive understandings and solutions.

Our universe may be not infinite in all directions, but closed like the surface of a cylinder or sphere. I consider simple closed spacetime which is flat (not curved) and show that it is significantly different, though locally indistinguishable, from Minkowski spacetime. Most fundamentally, the Relativity Principle (that an inertial observer cannot distinguish experimentally whether she is stationary or moving) and Reichenbach’s Round-trip Axiom (that two light signals sent simultaneously in the opposite directions along a closed path return simultaneously), which hold in Minkowski spacetime, fail to hold in this spacetime. Consequently, distant clocks cannot be synchronized following the standard procedure proposed by Einstein except for those under some particular motion, and so there is privileged inertial motion. And it is simplest to take the one-way speed of light to vary from inertial frame to inertial frame and the simultaneity relation to be not relative but absolute. These features have important implications on various philosophical issues regarding time and special relativity.