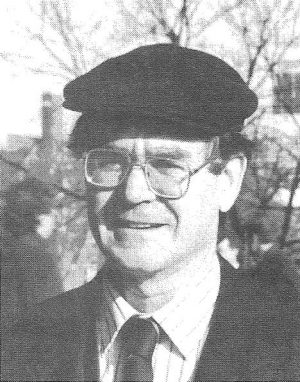 In the winter 1992 edition of Philosophy News, Ronald De Sousa interviewed Ian Hacking (both are now Professors Emeriti in our department). Professor Hacking discusses his writing strategies and his philosophical influences, and even reveals that he threw his manuscript of a book about Foucault into the “dustbin”! Read the interview below.

Toronto Philosophy News: How did you get into philosophy?

Ian Hacking: I was a mathematics and physics student at the University of British Columbia, rather younger than most of my contemporaries, if that makes any sense, and I fell under the sway of deep concerns about Being, the Yin and the Yang, and so on. At the same time I was working for the Mobil Oil Company and then the Shell Oil Company in Alberta. 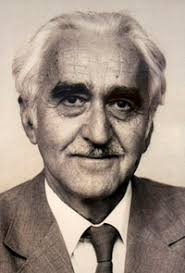 I had a bizarre education, from the great teacher Casimir Lewy, which consisted almost entirely of reading Frege, Russell, and Moore. I think that was a wonderful education – for me, not for some other people who had the same education and became very narrow, in my opinion. But having learned how to do something seriously, I became able, I hope, to do lots of other things seriously. It would be terrible to have that be the system of education everywhere, but it’s always nice that there is some place where it’s the system of education, where you don’t have to fuss around with a general curriculum. As a consequence, I have become widely regarded as being all over the shop.

TPN: You may be all over the shop, but do you take philosophy outside the shop? Is philosophy, for you, also a guide to life?

IH: Well, I live my life by being a philosopher. I think that probably I would live my life better if I were to take more cognizance of my philosophy, But I don’t really want to get into details about that.

TPN: Let’s get back to philosophy then. When you look at the history of philosophy, as both a philosopher and a historian of science and philosophy, what’s the big idea that has most captivated you?

IH: The two people who clearly most influenced me are Michel Foucault and Ludwig Wittgenstein. I’ve also enjoyed playing with my friend Leibniz, but I regard that as a different kind of activity. But apart from one piece for the New York Review, I’ve never written about Wittgenstein. And although I’ve written a couple of articles about Foucault, and had been asked, right at the beginning of the Foucault industry, to write a massive and wonderful book about him, what happened was that I took the whole huge manuscript and threw it in the dustbin outside building 90 at Stanford. All the graduate students stood around and said, “We can each have a chapter and do a thesis.”

TPN: Why did you do that?

IH: Oh, it was getting scholastic and convoluted. I preferred to use some ideas that I had gotten from Wittgenstein and Foucault in the work that I myself do rather than getting into saying what they did.

TPN: So you’ve remained largely silent about the people who most influenced you, and you chose to write, instead, about other people.

IH: Or other ideas.

IH: I’m good at starting things. Aside from Richard Braithwaite, I was the first person to do probability and statistics in the modern vein. That was a very rewarding experience for me. There I was, gone back patriotically to UBC, I wrote this book about statistics, and although I had a good publisher – Cambridge University Press – I was nobody in that world. But within weeks of that book appearing, I had some of the most serious, detailed letters that I’ve ever received in my life from the major figures in the field. They were delighted that a philosopher took them seriously and expressed some of their own conceptual worries, as they said, better than they had been able to do. So that was a very good introduction to the learned world. This book arrives on someone’s desk…

TPN: And they actually read it!

TPN: What else did you start?

IH: Well, Renford Bambrough in Cambridge used to say that the fact that so many books about Foucault are sold in the Cambridge bookstores is solely due to Ian Hacking. And David Hoy, who edited one of the early Foucault anthologies, used to say I should get royalties… Actually I got interested in Foucault thanks to André Gombay. We were walking through the African Veldt, and he said I’ve got this book which I think you will like. It was a (not very good) English translation of Madness and Civilization, and I learned a tremendous amount. 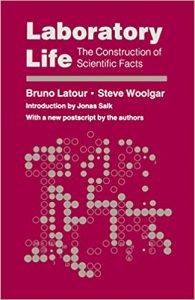 And again, learning from other people, I started the enthusiasm for experiment in the philosophy of science. My friend Francis Everett and I used to go walking in the Stanford hills – or running, sometimes, he does Marathons though he doesn’t look it. He’s the person who’s planning the only experimental test of the theory of gravity. It’s called Gravity Probe II. You put a gyroscope up in space and see what happens, and the predictions are very different depending what the laws of gravity are. After the shuttle disaster, who knows when that will actually fly. But anyway, Francis had written a very interesting book about Maxwell; and he and I started talking about experiments. It happened that Representing and Intervening came out just a little bit before everybody else’s books on experiments except for Bruno Latour’s Laboratory Life.

TPN: And what are you in the process of starting these days?

IH: I think I’m starting something by trying to become genuinely knowledgeable about topics like child abuse and multiple personality. Those few philosophers who do think about these things don’t know the science. They don’t do what is necessary. On Friday, I’m going to the Ninth International Congress on multiple personality. I’ve got a full three day schedule of talking to all the experts. They know that I’m now a seditious influence, but they’ll talk.

TPN: And why not? They’re surely not so modest as to think they won’t influence you… Do you often do this sort of “field research”?

IH: Well. I wrote a piece for the London Review a while back on Oliver Sacks’s Seeing Voices. I spent about three months researching that. I was helped by a graduate student, Trish Glazebrook, and a friend of hers, but I had to learn it all from scratch, going to deaf bars in town, getting to know quite a few deaf people.

TPN: Can you tell me a little about how you work?

TPN: How early do you get up?

IH: About six. I reckon I probably don’t have a good thought after nine.

TPN: So by nine, you feel you can get on with your professor’s chores, knowing you’ve already done the day’s serious work.

IH: That’s for sure. In fact, if don’t do something early in the morning, I feel bad about myself.

TPN: I can’t do it, but I get the impression that people who work early in the morning seem happier…

IH: I’m not all that happy, I have periods of black depression. And they’re usually produced by times when everything has gone just absolutely superbly, when I’ve really managed to say what I wanted to say. I wrote a very short piece about Michael Ayers’s new study of Locke for the London Review of Books. I think I addressed about fifteen major questions in the course of 2218 words, and I was totally drained after it. Though that was a very minor thing.

TPN: In a relatively popular medium. Lots of people would like to do that, I think, but not everyone can do it.

IH: Yes, I feel it’s enormously important to write these popular pieces that are read by lots of people, because they teach people about things they hadn’t thought about. Undoubtedly, it’s enormously classicist. People who read those sort of intellectual weeklies are getting their kicks that way. But I still think it’s worth doing. I got fired by the New York Review, by the way. I think there was a phase when Bob Silvers, the editor, thought philosophers had very interesting things to say, but lately they seem to have decided otherwise. And besides, the piece I had sent them was probably rather weak, And Bob Silvers and I are still friends.

TPN: Can you tell whether you enjoy writing more or less than reading?

IH: I think I’m a bad reader and a bad writer; in an odd way, I read very selectively. I have to be deeply interested in a question, and then I can read voraciously. Nature‘s review of The Taming of Chance said: “He seems to have read everything.” “Seems” is right, but I did have a maniacal obsession with trying to understand something that I think is fundamental to the whole of Western civilization, the fact that we’ve become chancy. I wanted to understand this from scratch, so just like I went to the deaf bars, I read these unbelievably dull statisticians. And I found just the right vignettes, scattered here and there.

Likewise, I’m a bad systematic writer, though what saves me from disaster is that I’m quite a good critic. I put in a million terrible jokes when I first write, but I’m blessed with the ability to leave only one in. I rewrite thousands of times. But I think my writing got a little worse with the computer, and I’ve gone back to writing with typewriter and pen. (See over there? My beautiful genuine Waterman pens.) But with a typewriter, I type the same paragraph over and over, hour after hour, like Flaubert. I’m a pathological writer.

TPN: Why can’t you do that on a computer?

IH: I spend too much time, on a computer, making things look pretty. I can move a sentence, and press a button and it all comes out looking terribly definitive, but for me it’s better to rewrite the whole paragraph.

TPN: So do you give a messy copy to the secretary?

IH: No; at the last stage I transfer it all to the computer. That’s because the last time I had a secretary was when I was at the at Princeton Institute. And that was wonderful, because everybody else had a computer, and there were all those tenured secretaries with nothing to do so they did it all for me!

TPN: You didn’t actually answer my question about the pleasure or pain of writing.

IH: It’s got its highs and its lows. I like to pick up things from what other people write, and twist them around.

TPN: How do you mean?

IH: Well, I mentioned the piece on Locke I did; in the first paragraph, I managed to say, “But Locke… Locke plods.” You get the allusion? It’s Swift: “But Celia, Celia Celia sh…”. It’s the play aspect of writing. I enjoy that.