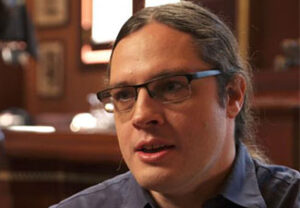 This year’s Edith Bruce Memorial Lecture on Immortality will be delivered by David Wallace, Mellon Professor in the Department of History and Philosophy of Science at the University of Pittsburgh. Both a trained physicist and philosopher, Dr. Wallace has research interests mostly in the philosophy of science. He has been particularly active in developing and defending the Everett interpretation of quantum theory (often called the “Many-Worlds Interpretation”); his book on the Everett interpretation, The Emergent Multiverse, was published in June 2012 by Oxford University Press.

Dr. Wallace also has philosophical and conceptual interests in quantum mechanics, quantum field theory, statistical mechanics, general relativity, symmetry and gauge theory, and principally all contemporary philosophy of physics. Outside philosophy of physics, he is interested in emergence and reductionism, in structural realism, and in decision theory.

In 1996, a benefactor named Edith Bruce made a substantial donation to the University of Toronto. This donation was intended to underwrite an annual lecture on the topic of life after death. Following well-attended lectures in 1998 and 1999, the lecture series was organized on a longer-term basis by an advisory committee of faculty members from the Department of Philosophy and, at the time, the Centre for the Study of Religion. Over a period of years, the topic of immortality widely construed has been explored from a variety of philosophical, religious, and scientific perspectives.