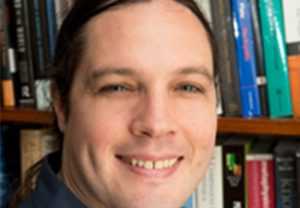 The Joint Specialist Program in Physics and Philosophy is delighted to host as this year’s speaker David Wallace. Dr. Wallace is a Mellon professor in the Department of History and Philosophy of Science at the University of Pittsburgh, where he also currently serves as the director of graduate admissions. Originally trained as a theoretical physicist, he now focuses his research interests mostly on the philosophy of physics. In particular, he has been active trying to develop and defend the Everett interpretation of quantum theory (often called the “Many-Worlds Interpretation”).

Everything You Always Wanted to Know about the Many-Worlds Interpretation of Quantum Mechanics But Were Afraid to Ask: A Conversation with David Wallace

The Many-Worlds Interpretation of Quantum Mechanics provides a resolution to the vexing quantum measurement problem that is compatible with relativity. It does so, however, at what many regard to be a significant cost; namely, the postulation of the existence of many worlds which are causally isolated from, but no less real than, our own. This event will provide an opportunity to explore the Many-Worlds Interpretation. The event will begin with a discussion between Michael Miller (Toronto) and David Wallace (Pittsburgh), one of the foremost advocates of the Many-Worlds Interpretation. This discussion will be followed by an open question period during which audience members will have an opportunity to ask questions of their own. This event is organized by the Physics and Philosophy Undergraduate Specialist Program. 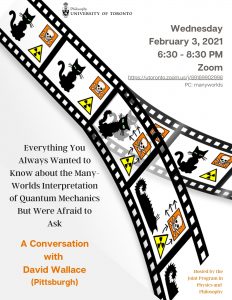