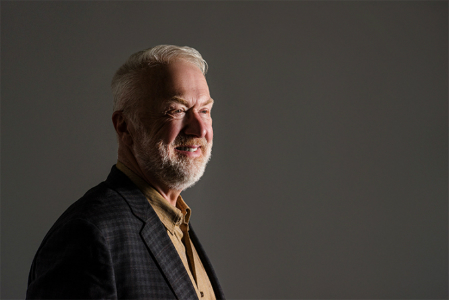 ‘We need to be cautious about our enthusiasms, rein in our exaggerations of what AI is going to do, and dig a lot deeper,’ says Brian Cantwell Smith, the new Reid Hoffman Chair at the Faculty of Information (photo by Meg Wallace Photography)

Everyone is thinking about artificial intelligence lately—from U of T computer scientist Raquel Urtasun who recently joined Uber’s research team to the establishment of the Vector Institute, an elite Toronto-based applied research outfit, and even to our own philosopher Mark Kingwell, who has recently spoken on the ethics of AI.

Now, another esteemed U of T philosopher is taking on a high-profile position in AI research. Professor Brian Cantwell Smith, specialist in cognitive science, informatics, and philosophy of language and mind, has been selected the inaugural holder of the Reid Hoffman Chair in Artificial Intelligence and the Human at U of T’s iSchool.

The chair’s sponsor, Reid Hoffman, is co-founder of LinkedIn and a partner at Greylock, an influential venture capital firm; he’s “widely respected as one of Silicon Valley’s most visionary and innovative leaders,” reports U of T News. Hoffman and Smith also have a personal connection: they met at Stanford University in 1989, when Hoffman was a student in one of Smith’s courses, Philosophy of Artificial Intelligence.

Can computational systems have self-knowledge? What differentiates genuine human understanding from AI? Will we be too quick to give computers roles that actually require human thought? These and related questions have been at the forefront of Smith’s ongoing research into the intersection between computation and humanity, an inquiry he will be able to explore even more deeply during his tenure as the Reid Hoffman Chair in Artificial Intelligence and the Human.

Read all about Reid Hoffman and his iSchool endowment at U of T News.

Read an interview about the future of AI with Brian Cantwell Smith in U of T News.

Among other things, Professor Cantwell Smith points out that the discussion about AI often falls into two camps: “the doomsayers and triumphalists. Either it’s all going to be terrible, or it’s all going to be wonderful.” Rather, he advocates for a more nuanced understanding of the effects and implications of AI: “We need to be cautious about our enthusiasms, rein in our exaggerations of what AI is going to do, and dig a lot deeper. My primary caution is not about the technology itself, but about our interpretation of the technology. That’s where I think we need neither enthusiasm nor panic, but cautious, serious, reflective deliberation.”

Want to know more about Professor Cantwell Smith’s research? Watch his 2017 lecture on Ethics of AI in Context series at U of T’s Centre for Ethics:

The Department of Philosophy warmly congratulates Professor Cantwell Smith on this exciting appointment!