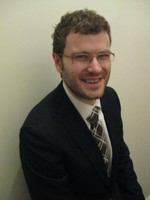 Benj Hellie’s research interests include philosophy of mind (consciousness, rationality, intentionality, perception, action, personal identity, interpretation, physicalism); epistemology and philosophical semantics (traditional and formal); and the history of analytical philosophy. Get to know him in this Q&A!

From early days I have been interested in pulling back the curtain, so to speak. I became interested in logical puzzles in grade school by reading books by Martin Gardner; in junior high I would occasionally spook myself with the thought that it might be all just a dream, or that I might be a puppet controlled by aliens despite my sense of free will. In high school, I was on the debate team and the math team: the first made me think in terms of clash, structured argumentation, and the creative development of big weird ideas; the second made me think in terms of a rigorous search after truth (but definitely not vice versa!). Around that time I also (somewhat embarrassingly) developed an interest in the plutocratic propagandist Ayn Rand, who offered a really bad (and yet still accessible) history of philosophy: she made philosophers seem like crazy nuts, which of course piqued my interest. When I entered college, I knew I wanted to major in something abstract: math, philosophy, or economics. In the third quarter of my freshman year, sitting in the front row in a trailer classroom listening to Ed Zalta’s intro lecture on free will, I was instantly struck by the way philosophers had managed to impose structure on issues that, while fascinating, seemed like big nebulous blobs: at that point math and economics dropped out of the picture.

I’m writing a book I call Conscious Life. The idea of the book is that a person’s stream of consciousness is the same thing as all the things the person does in their life. For many centuries, philosophy has been captivated by a picture on which consciousness is a sort of inert passive spectator. I think that as a result of this, a lot of issues philosophers are interested in are in a terrible muddle: in many cases, in ways that don’t even show up until you start thinking my way.

Probably Descartes. Even though he invented the sort of spectatorial view I oppose, he also invented just so much incredibly useful stuff. Human beings see things from their own point of view, but we can also ‘ascend’ from our point of view and take a ‘bird’s eye’ or even ‘God’s eye’ view (as scientists try to do). Descartes worried about the potential for clash between these points of view, asking questions like ‘who am I and how do I fit in to a more ‘objective’ world?’ and ‘what happens when what seems like truth from here could be all just a dream in the ‘objective’ world?’. These questions are still at the cutting edge in philosophy.

Of the philosophy teachers you found especially influential, what was something distinctive you learned from one of them?

I was fortunate enough to be studying in the Princeton department in the last years of the great David Lewis. Although I tear my hair out over most of Lewis’s positive views and quite a few of his philosophical preoccupations, he remains my model in many respects. The ambition and scope of his vision is without parallel in the analytic tradition; many of his papers still contain logical tools that philosophers have yet to start exploiting; the user-friendliness and beauty of his prose is a model for all of us (and one can only stand agape at its profusion: thousands of printed pages). A bit less at arm’s length, I learned from my advisor, Mark Johnston, to pursue philosophical research in an ethical spirit. I am not an ethicist in any strict sense, but in my work in the philosophy of mind I try to keep an eye on what matters. I think this keeps me moving.

What do you try to bring your undergraduate students in the classroom?

Relevance; skepticism; imagination; rigor. I want students to feel engaged; to start to peer behind the curtain; to feel that they can (after appropriate training) do this too; to learn intellectual techniques to make this all possible.