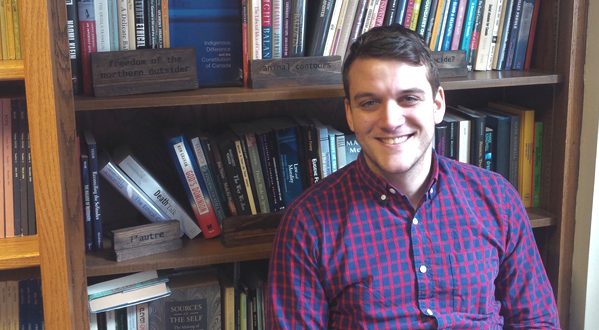 The Department is pleased to announce that the winner of the 2016 Martha Lile Love Teaching Award is Jeremy Davis, for his PHL271 Law and Morality course in summer of 2016.

The Martha Lile Love committee was impressed by Davis’ well-structured course design. The course began with philosophical accounts of liberty and the law and then applied those perspectives to three controversial topics that appear to place liberty of expression in tension with the protection of oppressed groups: religious toleration, hate speech, and pornography.

The committee was particularly struck by Davis’ inclusion of debates between students in lecture, both as a teaching tool in the classroom and as a way to add variety to the skills students were asked to develop in addition to written argument analysis. Students had the chance to weigh in on the question up for debate via online polling both before and after their peers presented their arguments, allowing the class to see the difference those arguments could make.

In addition, the committee would like to acknowledge Michael Blezy‘s fine work with an honourable mention for his course PHL217 Introduction to Continental Philosophy course in summer of 2016.

The department extends its gratitude and appreciation to all graduate instructors for their excellent work during the past year.