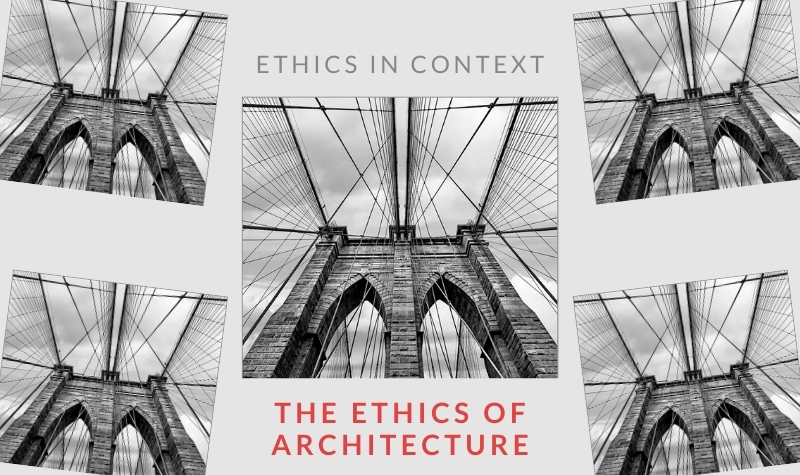 Architecture—so intertwined is it with our daily lives that most of us rarely pause to think about it, except maybe when travelling (remember that?) or reconsidering our places of residence. Yet the built environment, from the lowly doorknob to such spectacular feats of engineering as the 1,200-foot glass pedestrian bridge spanning the Zhangjiajie Canyon in China’s Hunan Province, reflects and responds to our societies’ endeavours and concerns, thus becoming intimately entangled with questions not only of aesthetics or technology but also of ethics.

The Ethics of Architecture: The Book

Enough reason for Mark Kingwell, professor in the Department of Philosophy and a prolific commentator on both social conduct and theories of design (among other subjects), to set about writing—and recently publishing—a book titled The Ethics of Architecture (Oxford University Press, 2021). The slender volume of 176 pages takes the reader through six brief chapters—or “walks,” as Kingwell writes in his introduction, “perambulation[s] . . . with a purpose” (p. 11). They explore, in the broadest sense, “the professional obligations of architects” (p. 11), those considerations in building that take seriously the idea of a common good, of architecture (and ethics) as a collective undertaking. Chapters thus investigate concepts of increasing abstraction, from the creation of buildings, environments, and communities to that of art, justice, and, finally, a sense of “Being.”

Is this a book reserved for students of architecture, then, or design theorists? No. While architects and architects-in-the-making certainly rank among the desired audience for The Ethics of Architecture, its author also hopes to address serious scholars of ethics, as well as “people outside of those professional fields who are interested in the built environment,” people reflecting on how cities do, or don’t, work. Given that an ever-growing number of humans worldwide dwell in urban environments (56.2 percent of the global population in 2020, projected to increase to 68 percent by 2050), such reflections prove essential.

This may hold especially true at a time such as our present one, contorting as it is in the grip of a sweeping international health crisis. As Kingwell details in his elegant preface to the book, world-historical shifts and disasters have always shaped physical structures (which of course extend beyond cities), especially around questions of public health. “There is a long history of architectural innovation driven by human frailty,” Kingwell says in conversation; think only of “secure thresholds, paved roads, sanitary doorknobs, functional sewage systems, indoor plumbing and heating, vertical density, elevators”— the list goes on.

Ethics in Context: The Series

Planning for the book began before the current coronavirus pandemic, but Kingwell uses the preface in particular to place his latest work in context, asking what “utopian opportunities” for architecture and more equitable societies might lie buried in the ruins of life as we knew it. Ethics in Context is also the name of the new Oxford University Press (OUP) series launched by the publication of The Ethics of Architecture. The series—edited by Markus Dubber, a professor of Law & Criminology and the director of the Centre for Ethics at the University of Toronto—locates itself at the interface between academic research and public discourse, proffering what we might call “accessible rigour” on relevant topics of the day.

The “inclusive, interdisciplinary vision of ethical inquiry that characterizes the Centre for Ethics,” says Dubber, a vision rooted in the conviction that “ethics” does not reside exclusively in the domain of any particular discipline, lent itself to the establishment of such a series simultaneously broad in scope and focused in the questions it pursues. As such, the series, uniquely, will continue to develop under the auspices of the Centre, whose various projects and events will serve as a forum for the ideas that it might explore. Already under contract is The Ethics of Racial Humor, by Syracuse University’s Luvell Anderson, with additional projects in various stages of development. Readers might look forward to fresh takes on the ethics of sport, for example, or be nudged down less-explored corridors of thought on the ethics of apology.

When asked whether he thinks that such relatively short, less specialized works represent the future of scholarly publishing, Dubber responds with a resounding no: “I don’t think more accessible forms of scholarship will—or should—replace other types of scholarship. I do think that, as scholars, especially at public universities, we should ask ourselves to what extent we can bring our experience, expertise, and resources to bear on issues of public significance,” an objective he hopes both the Ethics in Context series and the Centre for Ethics itself facilitate.

Writing at the Intersection of Scholarship and Public Discourse

And what about writing at the interstices of scholarship and public discourse? Does Kingwell, no stranger to the territory, follow any specific rules here? Because his volume inaugurated the series, thereby “offering a sort of keynote,” he says, he strove for an “effective middle voice” that would meet OUP’s rigorous peer-review standards while retaining appeal for a non-professional readership. “This book,” he claims, “felt more like an advanced seminar with smart people from various disciplines, plus some auditors. You can’t take anything for granted, so no exclusionary jargon or inside terminology allowed; but the material has to be meaty enough to reward serious interest.”

Above all, however, the most basic rule of good writing applied: clarity. Firm in his belief that “good writing is an essential part of good thinking,” Kingwell aims for “lucidity first, and then maybe some degree of elegance on good days” to make “every sentence an argument, every clause a plea for understanding.” And, yes, that involves good basic grammar and lots of reading (often fiction, in his case) for a “sense of what language can accomplish.” Oh, and: “avoid adverbs.”

It might be time for a walk. We think Mark Kingwell would make for an excellent strolling companion.

Want to learn more? Join Mark Kingwell in conversation with critics about his book online at the Centre for Ethics on June 9, 2021.