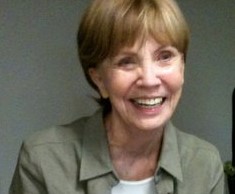 On 11 October 2016, the University of Toronto Mississauga lost a treasured friend and member of our family: Professor Jacqueline Brunning of the Department of Philosophy passed away at age 81. Jackie would dislike that I am writing this because she asked that no commemorations be held in her memory. But Jackie was always open to debate, and I write this to persuade her that a few words about her life are in order—that a few words are needed in this time of grief. As a colleague and friend of hers, I am only one of the numerous people whose life she impacted and all of us feel her passing sharply.

“Impact” is not quite the right word. She had more than an impact; she had a “profound influence,” as a former student of hers and mine recently wrote. Indeed, her life touched too many people’s lives for her to ask all of us to keep silent. And she taught us too well—she taught and encouraged us to use our voices; as Percy Shelley laments of the death of the poet John Keats in Adonais: our love and respect for Jackie teaches our grief to fall like music from our tongues.

I cannot be silent when Jackie devoted her life to teaching students and inspiring friends not to be silent. It feels wrong to be silent because Jackie’s life-long mission as an educator was to teach students to speak, to voice, to opine—to appeal to logos, ethos, and pathos—as they consider, scrutinise, challenge, and shape their individual relationships with the world, ideas, institutions, politics, history, and culture. She demanded that students find their critical voices and opinions. As a friend of hers, she would have never let me remain silent on any matter—to be passively and lazily informed about any subject. She was the very model for living a curious, engaged, and full intellectual and cultural life, and she would have pushed, nudged, and coaxed to know one’s thoughts.

Jackie’s life-long mission as an educator was to teach students to speak, to voice, to opine—to appeal to logos, ethos, and pathos—as they consider, scrutinise, challenge, and shape their individual relationships with the world, ideas, institutions, politics, history, and culture.

Jackie earned a B.A. from Madonna University, a Masters degree in Mathematics from Detroit University, and a M.A. and Ph.D. from the University of Toronto. She began teaching Philosophy part time at Toronto in 1980, and full time in 1982 after completing her doctorate in November 1981. She began her studies and early teaching at Toronto while still wearing her habit, having taken orders as a Catholic Nun some years before. In 2016-17, we are celebrating the 50th anniversary of UTM, and Jackie’s 36-year teaching career has played a significant role in shaping Philosophy and the Humanities during these 50 years. Before the major restructuring of the Science and Humanities Faculties of Erindale College (as it was known from 1965 to 1998) into smaller departments in 2003, Jackie served for nine years as the Discipline Representative for Philosophy, in the Division of the Humanities (1993-2002). Under her stewardship, enrolments in Philosophy grew significantly during this period.

Jackie’s influence in the class was just as profound as it was outside of the class. In 1991, she was recognized for her superior teaching with a Faculty Teaching Excellence Award. For many years, she taught the first-year introduction to Philosophy (PHL 105), and Modern Symbolic Logic (PHL 245) courses—courses that she was constantly polishing, sharpening, and improving as she taught them almost annually for more than 30 years. Both courses have large enrolments, so Jackie has, by even a conservative calculation, taught well over 10,000 students in her 36 years of teaching at Toronto. For countless students, she was the face of UTM Philosophy: Jackie was the first philosopher in the department and one of the first professors at UTM that they would meet as they began their university studies.

Jackie’s influence in the class was just as profound as it was outside of the class. In 1991, she was recognized for her superior teaching with a Faculty Teaching Excellence Award… Jackie has, by even a conservative calculation, taught well over 10,000 students in her 36 years of teaching at Toronto.

Many of Jackie’s students have gone on to become philosophers, professors, and teachers themselves. These and many more have written to me and other colleagues at UTM about her teaching and profound influence. Here are some of their words and thoughts:

Professor Brunning was a “sharp irreverent intellect” who had a “genuine concern for us as students.”

“What a character. What an intellect. What a joy. And what a heart—always taking a moment to discuss your future or your most recent exam. She would invite entire high school philosophy classes in to observe a lecture, to get a taste of learning at UTM. She didn’t spare them.”

“One of the better profs at the school, but she does not suffer fools lightly. She’s amazing and incredibly passionate about the subject.”

“I think one of the most incredible things about her was that she was so extremely invested in her students and always had the time to talk about anything—logic, personal issues, or any casual chat in between. She was also hilarious, so kind, and very honest. I really respected her as a professor and feel so incredibly lucky to have become close to her throughout my undergrad.”

I can only add a glimpse of what it was like to be Jackie’s friend for the last 15 years:

Jackie was smart, generous, kind, thorny, sarcastic, skeptical, stubborn, and always mindful of helping students and colleagues. She was the best kind of friend and colleague—always electric and inspiring. She came to U of T wearing a nun’s habit, but as a good friend of Jackie’s said to me this past week, she was 81 and loved tight jeans. Jackie had a dry, irreverent sense of humour. She was uproariously funny. Jackie and I talked about and debated: families, teaching, music, writing, life, books, philosophy, drinking, research, poetry, travelling, politics, ethics, epistemology, religion, art, culture, movies, and food. We talked about everything.

A final word. Jackie’s single best trait and the trait that encompassed her entire character as a person and educator is this: generosity. She gave openly of her time, her energy, her intelligence, and her heart as an educator and as a friend, whenever and wherever it was needed. At UTM, for many years, she has funded an undergraduate scholarship in the Department of Philosophy. For close to 10 years, she has run a two-hour tutorial every Friday afternoon for students in her class—on her time and her dime—for any students who wanted additional help.  She routinely donated the salary that she earned from teaching summer courses to a variety of organizations and charities. She made extra time for all students—students who were currently (or not) enrolled in her courses, and for graduated students who returned to campus to speak with her. She offered thoughtful and savvy advice to students about life and careers after earning their undergraduate degrees, and she was a strong advocate and mentor for female students who were considering future careers in the academy. She had a remarkable ability to remember thousands of students’ names, and many details about their lives, hobbies, interests, aspirations, and studies. She touched many students’ lives, and I know that she felt gratified and humbled to touched by theirs.