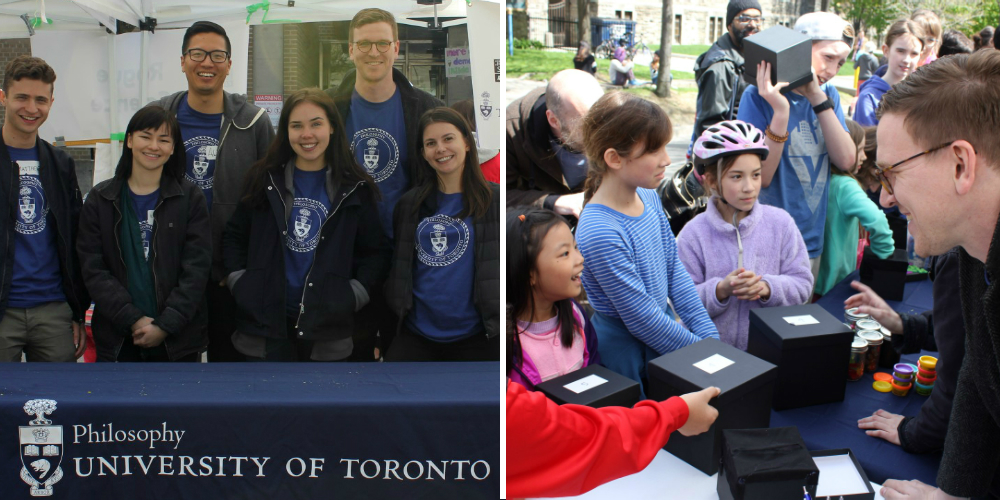 What qualifies as science? How are scientific observations and theories related? What is inference? How do we calculate likelihood? What methods do we use to know things?

These and related questions are familiar to philosophers of science, and indeed to all philosophers, but they may not be commonly heard at a science fair where kids are otherwise playing with solar powered machines, stethoscopes, spiders, and fluorescent bacteria.

For the first time at Science Rendezvous, a free coast-to-coast open house and festival that showcases feats of science and engineering, the Department of Philosophy asked key questions about science through engaging activities that piqued the curiosity of kids and adults alike.

Check out pictures from the event on our Facebook page. 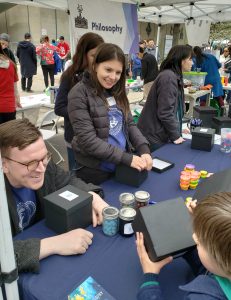 St. George Lecturer Alex Koo and Assistant Professor Michael Miller, both specialists in philosophy of science, worked with undergraduate philosophy students Olivia Smith, Kenzie Tsang, Matthew Gerry, and Brittany D’Annunzio to set up a “black box activity” at the Science Rendezvous philosophy booth. Plain black cardboard boxes of varying sizes were sealed with everyday objects inside and visitors were asked to try to guess the contents of the boxes without looking.

“Black Box activities demonstrate a style of reasoning often used in science,” says Koo. “Scientists investigate the world and draw conclusions using indirect evidence. When they acquire more evidence, their hypotheses change. This was reflected when people moved the boxes and manipulated them in different ways; their guesses changed as well.”

Participants also had the chance to reach their hands in to boxes to examine objects by touch and then attempt to recreate what they felt with Lego or Play-Doh. And in the most popular activity, clear jars filled with various types of candy could be compared to one opaque jar containing a mystery candy.

After participants made their best guesses, Koo and the philosophy team asked them how certain they were. Could any other objects fit the data they had? What could they simply never know about the mysterious objects?

“This line of questioning showed [participants] the limits in their confidence and knowledge claims about what is inside the box,” says Koo. “Through this technique we were able to demonstrate the philosophical problems of scientific realism, underdetermination, and limitations of abductive inference.” 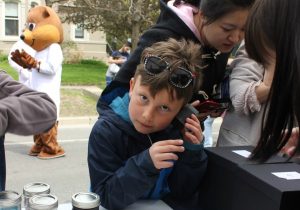 Asked what kinds of reactions the philosophy team got, Koo says: “The amount of curiosity from our participants was incredible—there’s just something about a sealed box that makes kids and adults alike really want to know what’s inside. They were all so excited to make a guess immediately after a quick shake. Suggesting that they try to gather more information by fiddling with boxes in different ways was amazing to watch. Every time they gathered more data you could see them revising their guesses in their minds. It was like watching little scientists in real time.”

Koo says he and the team were “blown away” by how committed some of the kids participating in the black box activities were. “We were also really thrilled at how many adults simply saw the philosophy sign and wanted to come over and see what philosophers were doing at a science fair,” he says.