Every year, we mount a Philosophy Research Conference for undergraduate students to showcase their best work. This year’s conference featured 14 impressive student talks, as well as a keynote presentation by Professor Samantha Brennan of the University of Guelph. 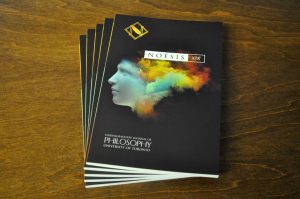 New issue of Noēsis: the undergraduate journal of philosophy.

The conference was also the occasion for the launch of the 19th edition of Noēsis, our undergraduate philosophy journal. The journal’s editorial board spoke at the conference, and presented the abstracts from some of the issue’s most compelling essays.

From Cindy Do’s “The Problem of Forgotten Evidence” to Bella Soblirova’s “The Ethics of Donor Siblings,” the conference’s presentations ranged in diversity, covering a wide spectrum of branches of philosophy, from metaphysics to bioethics and more. 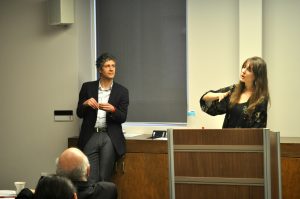 Josefine Klingspor presents her paper while U of T alum (PhD, 2017) Adam Murray looks on.

Fourth-year undergraduate student Josefine Klingspor was happy to share her enthusiasm for the event: “The conference helped me refine my thoughts about the topic by suggesting what components of my argument may be further clarified, and by suggesting where to go next, as I continue working on this project. The highlight of the conference was really to listen to all the different talks, which covered a broad range of topics. I was impressed by each of my colleagues’ projects, and their presentations were all very engaging, insightful and interesting.”

Josefine is in the fourth year of undergraduate studies and will be returning as an MA student with us next fall. 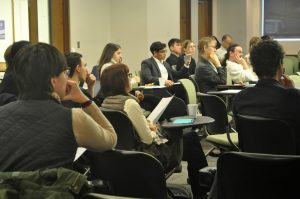 Josefine’s own presentation, “The Role of the Infinite Intellect in Spinoza’s Metaphysics”, demonstrated her ambitions and interests in philosophy: “In my paper, I offer a re-interpretation of the role of ‘the infinite intellect’—God’s intellect—in Spinoza’s ontology. I argue that the infinite intellect is explanatorily prior to all of God’s creation because it determines the formal essences of things. According to the traditional reading, God’s intellect does not have this kind of priority.”

Josefine began working on this project last summer under the supervision of Professor Nick Stang, and she is now being supervised by Professor Karolina Hubner.

The department warmly congratulates all the participants in the Undergraduate Research Conference for their creativity, tenacity, and staunch commitment to doing great philosophy. 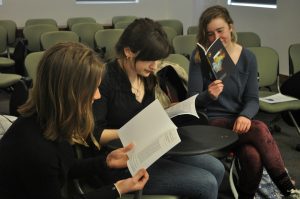 Students look through the new issue of Noēsis, hot off the press!