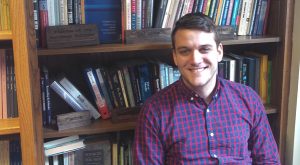 The Graduate Department administers a variety of awards and honours available to our graduate students, including teaching awards, recruitment fellowships, essay prizes, and more.

This prize recognizes extracurricular scholastic achievement. It is awarded annually by the Graduate Department to those of its students who have been selected to read a refereed philosophy paper at an international, national, or regional philosophy conference. The prize is distributed to winners on a proportional basis.

Established by Gordon Cheesbrough and matched by the Ontario Student Opportunity Trust Fund (OSOTF), this fellowship is often deployed for recruiting new students. It is awarded to a graduate student in the Department of Philosophy for the purpose of research (i.e., conference presentations, travel, etc.)

This award recognizes the excellence of a philosophical essay written by a graduate student who is either registered in the Graduate Department or has completed one of its courses. One or more such awards, including a small stipend, may be given each year. Nominations require the signature of the student and nominating letter from a faculty member of the department.

The award is given to a doctoral student who, as an undergraduate philosophy course instructor, has demonstrated to the Awards Committee a combination of skill, inventiveness, competence, and enthusiasm which merits departmental recognition and commendation. (The Committee may decide against recommending any winner in a given year.)

The Martha Lile Love Teaching Award takes the form of a small stipend. Deadlines for nominations are announced by the Director of Graduate Studies annually. Normally the deadline is mid-November for fall and summer term instructors, and the end of February for spring term instructors. Candidates may nominate themselves for this award, or they may be nominated by a faculty member. Nominations should be sent in the form of a brief letter or e-mail to the tri-campus TA Coordinator.

This prize, awarded annually, recognizes the excellence of a doctoral thesis in philosophy submitted and successfully defended by a student in the Graduate Department during the last calendar year. A nominating letter from the thesis supervisor is required.