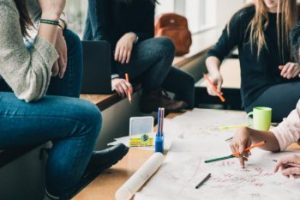 The following tips, advice, and resources have been compiled by the Department of Philosophy’s staff and faculty on the St. George campus. However, students may also find it useful to peruse the resources compiled by our other campus departments, UTM Philosophy and UTSC Philosophy, many of which apply to philosophy students across the board.

Philosophy requires understanding, analysis, and criticism of issues and problems that are central to human life. It involves sensitive and critical reading of philosophical writings and one’s own discussion, both in dialogue with others and in written form. Hence philosophical reading, debate and writing are the central tools of the discipline – demanding a critical approach, analysis, and understanding.

The Department of Philosophy works to ensure that each philosophy student can acquire the skills and resources he or she needs to become a better philosopher, as a reader, as a discussant and most of all as a writer.

Here are some useful resources:

Advice on Writing in Philosophy

The following documents  are adapted from course handouts prepared by philosophy instructors. While they contain much valuable advice, they cannot, and are not intended to, replace the instructions you receive from your instructors in your philosophy courses.

General advice on academic writing, as well writing in other disciplines, can be found at Writing at the University of Toronto.

On Plagiarism and Using Secondary Sources

Plagiarism means taking material written by another and offering it as one’s own. The copied matter may range from a few sentences to a whole paper copied from another student or from a book or journal.

Very few students are dishonest, trying to get credit without any mental effort. Once in a while a student is playing the ancient game of putting something over on the instructor, in part at least to see if it can be done. More often, at least in beginning courses, the motives are more complex. Students who plagiarize may be so scared or so befogged in what is a difficult or puzzling course that they resort to the only way they see of getting a desired grade. And sometimes students do not understand what rights they have in using the materials of others or in receiving help.

Occasionally students think that they are justified in plagiarizing. For instance, it is said that plagiarism, if it hurts anyone, only hurts the plagiarist, or it is purely a matter of individual judgement whether to copy or purchase an essay. Or it is held that plagiarism is corrupt only within a system of evaluation involving grades, and this system is itself bad.

Students who hold either of these views are seriously mistaken. The overall effect of widespread plagiarism is that standards for A and B essays tend to become higher, due to the inordinate circulation of first-class work. The effect is that students who struggle to develop their ideas in an essay get lower marks than they might otherwise receive were it not for the existence of fellow students whose main abilities reside in paying money or copying texts.

So long as some method of evaluating student performance in philosophy courses exists (and there seems no prospect of its abolition) then plagiarism is a form of misrepresentation or fraud: the false claim that work presented for evaluation is one’s own. If no evaluation system existed then plagiarism would still be a mistake in that plagiarists forsake one of the main ways of advancing their thought and their ability to communicate ideas.

Plagiarism represents the failure of the student in the fundamental purposes of a philosophy course: critical examination and careful expression of one’s own ideas.  Mere copying of the work of others is the most complete failure possible.

Students who are afraid or puzzled should go at once to their instructor and discuss the situation frankly, the reasons for difficulties, the present faults in their work, and ways to overcome them. Serious effort intelligently directed will generally bring improvement. And students who are moving in the right direction, even if moving slowly, are doing something important. Students who have not learned how to handle material obtained from reading and study need guidance in the fundamentals of study and scholarship.

Writers expect that what they have published will be read and will be used; but they have a right to expect that their words will not be used without receiving credit. This is not merely a matter of courtesy to the writer, but also, because plagiarism is a form of scholarly fraud, a matter of the morality of scholarship.

Those using published material, then, have a twofold responsibility; first of absorbing the ideas into their own thought and, second, of giving credit to important sources. Students are not composing when they are merely copying. They should read and digest the material, get it into their own words (except for brief, important quotations that are shown to be quotations). They should be able to talk about the subject before they write about it. Then they should refer to any sources they have used, whether these sources are quoted directly or merely paraphrased.

In an informal paper the credit can be given informally, perhaps a note on the cover saying “This paper is based on …”; or it may be in the body of the paper:  “Professor Quine said in the lecture …,”  “Derrida wrote recently…,” or “So-and-so said …”

Or credit may be given more formally in footnotes at the bottom of the page.  Footnotes must be used in a research paper, but one or two would be in order in any paper for which a student has found material in print.

The greatest temptation to plagiarize is in a research paper, in which the material is expected to be based on reading various sources. But a research paper offers also the best opportunity for learning how to gather, digest, and give credit for material from published sources. At any rate it is necessary for college and university students to learn how to use such material accurately and honestly—by getting it into their own words and giving appropriate credit to sources used.

The following practices are all instances of academic dishonesty:

In any of these cases appropriate penalties will be applied.  If students are uncertain about how to prepare a term paper for a philosophy course, they should consult their instructor.

Substantial portions of this statement have been adapted from Porter G. Perrin, Writer’s Guide and Index to English, 3rd edition (Scott Foresman and Company, 1959), pp. 635-636.